According to The Architecture Foundation, owing to its 'uniformed commercial utility', 'Croydon is deathtown'. The actual quote appears on the Inside Croydon news site.
Occasionally, one spots an eye-catching natural phenomenon in among the sprawling metropolis that is Croydon town centre: 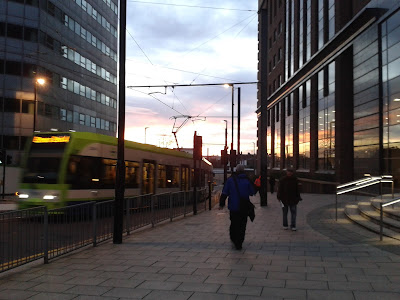 I sent in the picture above the Croydon Guardian:

No need for new build with capacity elsewhere

Three weeks have elapsed since I sent in an open letter to the Croydon Advertiser regarding the incinerator and I still haven't seen a reply...... 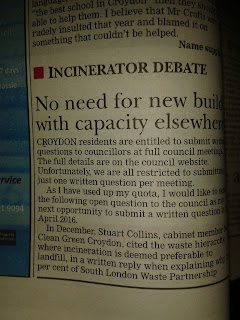 Solidarity with the junior doctors

Earlier this week, whilst on en route to my daughter's nursery, I decided to take a detour and support the striking junior doctors outside Croydon University Hospital, formerly known as Mayday Hospital. A registrar (junior doctor) at Mayday was on hand at the birth of our daughter when complications developed and I felt it was important to physically show support.

In a backdrop of corporations and multi-billionaires enjoying increased wealth through tax avoidance, I think most people would want doctors not to endure a real terms pay cut when morale is already low in the NHS. The thought of overworked and underpaid surgeons is not a happy thought if you are a patient about to drift off under anesthetic. If the frequency of honking from passing vehicles was an indicator of support, then it was evident that the public support the strike.

This pay cut is part of a systematic squeeze on our public servants. Secretaries of State don't simply impose pay cuts on those who in our mind save our lives. Just like the Fire Service before, they dress it up as remuneration refinement to make an overall saving in wages. I chatted at length to one of the strikers who was in his final year as junior doctor. He saw it the same way as I did. He also predicted that that the new contracts would simply be imposed - which they were the day after.

In attempting to win the argument Health Secretary Jeremy Hunt misquoted data regarding hospital deaths at weekends. Watching Jeremy Hunt on the Andrew Marr show was the extra inspiration I needed to take that detour and join the strikers on Wednesday 10th February.

Private Eye and other articles about the incinerator.

Its a weird time for us anti-incinerator campaigners. Despite losing the judicial review and seeing first hand the commencement of the construction of the incinerator, it feels like the negative publicity of the whole scheme has never been so high. Ever since Sian Berry and a small group of us ventured on to the Viridor site by accident, I've been struggling to keep a note of all the articles over the last 8 weeks..

I haven't had a chance to report on Sian's December visit on this blog, but the photograph below shows just how jittery the authorities and Viridor are. You can just make out  Andrew Turner, the key man for communications at Viridor, lurking behind the fence. A better picture of Spin Merchant Turner is on the Inside Croydon site. Why is he there? Answer: THERE IS ENOUGH SH!T FLYING AROUND TO STILL HAVE AN IMPACT ON THIS SCHEME AND EVERYONE ON THE DARKSIDE IS FEARFUL.

However the precise answer is here:

A handful of anti-incinerator campaigners met at Beddington Lane tram stop and walked along Beddington Lane to the Viridor site. Maeve Tomlinson suggested that we could head towards the site office. Whilst wandering down the access road, we were approached by a couple of Viridor employees wearing hi-viz. At first we thought they were construction workers but one of them turned out to be Andrew Turner! After chatting and answering questions, in what was a very cagey exchange, we wanted to take a photo to record Sian's visit. Mr Turner explained that this was Viridor's property, as was the access road and so no photos were permitted. This meant we had to cross the road to the other side of Beddington Lane (same side as ASDA). So we did. To our amazement, Mr Turner shepherded us off site, across the road and then stood behind the fence observing us as we took photographs!

I am struggling to find the article, but recently John and Elaine Drage have resigned as Secretary and Chair of the Sutton Lib Dems and moved up north! John Drage is up to his neck in controversy over the whole scheme.

Additionally, Sutton Council have rejected the suggestion I made about the £5,000 costs I owed them.

Posted by Shasha Khan at 4:55 pm No comments: