London Road residents and shopkeepers have had enough

There is a lot of anger and frustration on London Road, Croydon. I attended a recent meeting where it was decided to hold a march on Sunday May 13th from Mayday Hospital to Croydon Town hall.


It would be brilliant if Gordon Ross was elected Assembly member for Croydon and Sutton. Equally, it would be a fantastic if Jenny Jones was elected Mayor on May 4th. However, both results are realistically beyond reach when using the FPTP voting system.


The London-wide Assembly member ballot is a different story. Brendan Walsh takes a look at the value of the orange ballot paper in Croydon.

Olympics is a corporate event 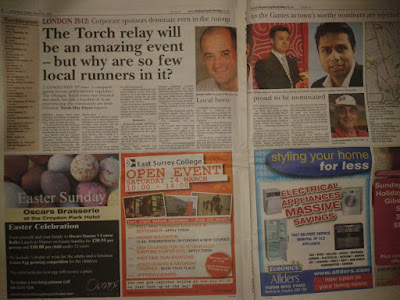 I was asked to comment on the dearth of local people invloved in the torch relay. That said I was pleased to see only my teacher from Woodcote High School selected.

Posted by Shasha Khan at 8:14 pm No comments:

Crucifixion along side our stall

I shot this video using my mobile phone on Saturday.


East London Lines have been interviewing the various Croydon and Sutton GLA candidates. Gordon has done a thorough piece to camera. I've also noticed that AM for Croydon and Sutton, Steve O'Connell, the present incumbent and Conservative candidate, has an image with his dog amongst the photo montage. Is this a case of animal exploitation? Poor dog may not want his image used for political purposes.

Can Ken throw out the incinerator?

Ken Livingstone was questioned about his views on the proposed incinerator during his visit to Croydon. I have seen varied reporting on what he said, but it appears he did say that he would oppose this particular application. However, I wondered why he didn't come out and say he would throw the application out.

It turns out that Ken may have actually said too much and prejudiced himself in the event he wins the mayoral race, and 'calls in' the application. AM member for Steve O'Connell clarifies this in an article in the Croydon Advertiser:

When initially asked by the reporter for my views on Ken's comments, I responded by saying, I would be in a better position to answer the question after the London Green Party's extraordinary meeting with Ken (last week). Last Monday (26th March), after a Q and A session, a vote was taken on whether to recommend Ken as second preference choice in the vote for Mayor of London.

Sadly the meeting clashed with our local monthly meeting. However, I did ask a colleague to ask Ken the following question:

The planned incinerator in Beddington, on the borders of Croydon and Sutton, not only affects these two boroughs but also Kingston and Merton, who are also part of the South London Waste Partnership, and Lambeth which is downwind. Why didn't you say (in your comments to the papers) you would throw out the Viridor application which is expected to be lodged with Sutton Council in June? And, can you assure (cast iron guarantee preferred) over 950,000 residents that you can and will throw out the application, even it is lodged in early June? What circumstances do you envisage that you will not be able to throw out the application if you are elected Mayor?

Ken's response included a bit about the planning process, but he did advise the meeting that his past action and chosen technologies for tackling waste in London should assure us that he will do the correct thing.

Ken fielded various other questions regarding his record and policy, and after a discussion amongst the 70 members present, it was agreed to recommended Ken as second preference. And so the slogan, #jenthenken was born. I think I would have preferred Jenny Thenny Kenny!!

You will read from my comments in the Advertiser article that our local party was satisfied that Ken would "do the correct thing."

However, at the recent Viridor public exhibition I did ask their team what would happen if Ken got elected and 'called in' the application. Their town planning consultant indicated that they would appeal to a higher authority, namely the government. Sigh.