On behalf of all those in the local party here in Croydon, a big thank you for the 855 votes!

6:30am - Outside Norwood Junction station handing out leaflets.

7.30am - Conservative AM Steve O'Connell arrives. We have a brief chat about Winston's  views on gay adoptions and how it would play out in the poll. We both thought he would get a boost in the polls. Steve tells me that he received an email only last night from a local member who has resigned because of  David Cameron's position on gay marriage.


7:45am - Full compliment of Tories are now outside Norwood Junction. I maintain prime position by the entrance. The Tories, in typical strategic fashion, have got every angle of approach to the station covered. Those approaching the station now have a Tory leaflet in their hands: 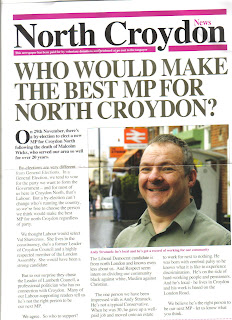 I bring a smile to the faces a number of commuters, on this cold morning, as I hold out the Green Knight leaflet:

"Try this one instead, it tastes better," I tell them!

8:00am - Many are puzzled to the origin of the NORTH CROYDON NEWS leaflet, that is, until I tell them it's a Conservative party leaflet. Devoid of blue ink, and the word Conservative is used twice in the following manner:
Candidate Andy Stranack is "not a typical Conservative," and "not what you'd expect from an aspiring Conservative MP."

8:15am - A couple of commuters take issue with the above leaflet with the Tories [who additionally are not wearing rosettes], asking why they are pushing it as a non - partisan election newsletter rather than a Tory leaflet. Many of their leaflets are thrown in the bin.

Respond to emails and communications at home, followed by lunch. 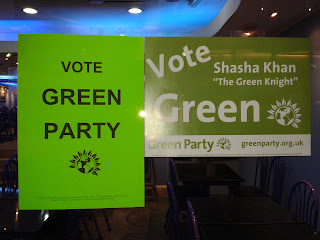 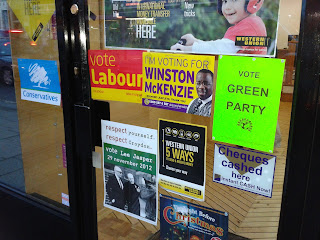 3:00pm - I pop over to see a Green voting former anti-apartheid campaigner on Elm Road. I am saddened when she explains, fearing a Conservative MP for Croydon North, she voted tactically [via postal vote] and put a cross by Labour. She is saddened when I tell her the Labour candidate is a Blairite.

4:00pm - I start leafleting outside The Islamic Centre on Gillett Road  - not much of a positive reaction here. I have heard from a local shopkeeper they have been urged to vote Labour by the imam because in the past Labour helped them secure funding.

4:30pm - After a couple of other poster stops in shops, I start leafleting outside Thornton Heath station. An Afro-Caribbean woman with her daughter says she is definitely voting Green and takes a poster. She says she follows local news intently and was in no doubt who she was voting for when she saw the Green Knight leaflet come through her letterbox.. I give her a hug!

4:40pm - UKIP candidate Winston McKenzie arrives but decides to occupy the area between the station and Tesco.

4:50pm - A silver haired couple [below] exit the station and say hello to me. They say that I deserve to do well based on the Croydon Advertiser hustings, but tragically the likes of Respect and UKIP may poll better. The lady spots Winston who is slowly edging towards the station entrance. All of sudden the lady challenges Winston on his homophobic views! Winston leaves the area. 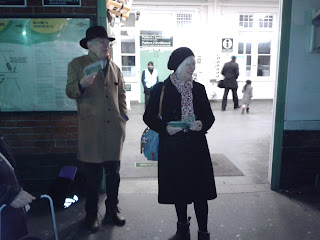 5:05pm - The RESPECT battlebus arrives blaring out Bob Marley songs. Their activists join us in front of the station. Lee Jasper is amongst them. 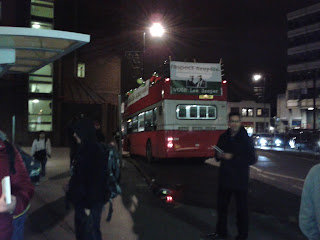 5:06pm - The lady now turns her attention to the Respect activists and Lee Jasper, challenging them on Galloway's defence of Julian Assange. Language used is fruity, to say the least. To avoid a scene developing everyone calms down through persuasion.

5:15pm - I say thanks to our supporters and bid them fairwell.

5:30pm - I start cycling towards Norwood Junction,  I am due to meet Mick O'Sullivan there and a Green member who has just moved from Horsham.

5:45pm - Arrive and commence leafleting. Many commuters recognise me from the morning. I AM NOW FREEZING COLD!!!

6:00pm - A first time voter asks me questions about how to vote and policies. She says she's waiting for her boyfriend. Realising many of the issues we campaign on are important to her, she takes some leaflets and helps out. 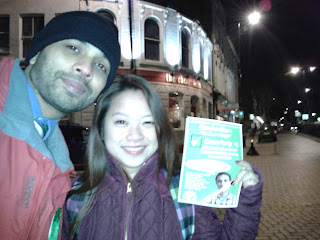 7:00pm - Head home, whilst continuing to stop to get posters affixed on shop windows.

After meeting the good people of the Upper Norwood Library Campaign, Natalie and I spoke to several local shopkeepers. 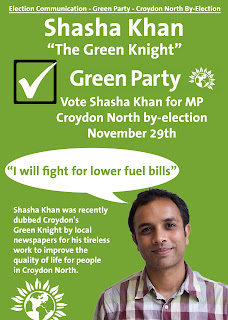 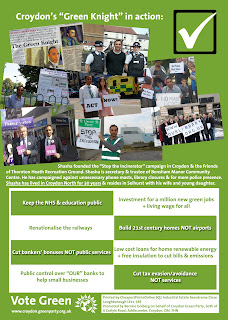 Brendan's letter in the Croydon Guardian

Well done for your front page article last week, reminding us all that it is not just the incinerator fumes, but the increase in traffic (and diesel fumes) that will adversely affect the quality of life for those of us living downwind of the plant. Boris Johnson has said that the level of public opposition will be one of the factors which will guide his decision on whether or not to allow the incinerator to be built. The Stop the Incinerator campaigners urge you to send emails to Boris Johnson to show your opposition.


A vote for the Green Party at the Croydon North by-election would also send a strong message to Boris that the incinerator is against wishes of the people of Croydon. I urge your readers to use this opportunity to make your feelings known.

Jean came to visit the Communal Hall in the Queen's road development (Thornton Heath), where I am a trustee and secretary. Jean agreed to explore available EU funding sources to help support the hall.
Jean was also able to help with my campaign whist in Croydon.


The Croydon Green party have been out and about in Croydon North this weekend, speaking to residents.
A group of members from the Croydon Green Party, including parliamentary candidate Shasha Khan, have been hearing from people living in South Norwood about how they feel on a wide range of issues, including the proposed Beddington Incinerator, the amount of rubbish on local streets and the fear about decreasing police numbers.

Liam Fretwell, Media Officer for the Croydon Greens, said: “It’s great to be on the doorstep, hearing from real people with real concerns.  We’ve learned that there’s a real hunger in Croydon North for a change.”
He continued: “We were proud to be out there, cutting through the political bickering that has blighted Croydon politics for so long and getting right into the heart of what makes Croydon such a great place: the people who live there. The dissatisfaction residents of South Norwood are feeling, with both the Tory council and the Labour ward councillors – not to mention the choice of Labour candidate – is something we Greens are perfectly set to remedy. A Green MP on November 29th is exactly what Croydon needs and we can see now that amongst Croydon residents there’s real hope for a brighter future.”

The party will be out again repeatedly in the lead up to the by-election, which takes place on November 29th.

If you want to ask Green Party candidate Shasha Khan about any issues or concerns you may have, or if you just want a chat, please contact Shasha at shasha.khan@greenparty.org .uk alternatively you can follow us on Twitter  ( @croydongreens ) or like the ‘Shasha Khan for Croydon North’ Facebook Page.

Revolution boys do it again!

One of my favourite TV shows at the moment is the 'The Revolution Will Be Televised' (TRWBT). These political pranksters remind me of Dennis Pennis. In my opinion, any programme that can highlight social injustices to a younger audience is doing a fantastic public service.

Just recently, I received an email from Dan Iles from the World Development Movement. This organisation has teamed up with TRWBT to fantastic effect. Please watch the video - link below.

The stars of BBC 3’s ‘The Revolution Will Be Televised’ are teaming up with World Development Movement to launch a new film today parodying Barclays’ role in speculating on food prices.

This hilarious spoof is meant to draw attention to the fact that Barclays is making profits of £500 million whilst speculating on food prices. This speculation is driving up the price of food in poor countries and drastically exacerbating world hunger.

Check out the 3 minute film: here

If you liked the film, please make sure to take action and send an email to George Osborne. Follow the link to see how.

Use the hashtags #Barclays and #foodspeculation if you can.

World Development Movement is an anti-poverty campaign organisation that fights against the policies that make poor countries poor. If you want to find out more about our organisation or sign up to our e- news please visit our website: www.wdm.org.uk