Green soothsayers in the local papers! 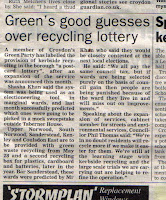 Croydon Guardian prints the recycling story!
Croydon Greens foretold, lets face it,
the enitirely predicatable wards
that would be selected for the
extended kerbside recycling facilities.
The movie below was shot on 31st March 2007.
The council made public their plans in the last week of April.

The meetings will start at 7.30pm, upstairs in the function room at the back which faces the Town Hall.

This is a Sutton & Croydon Green Party joint business meeting, and one of the main topics of discussion will be election candidates. 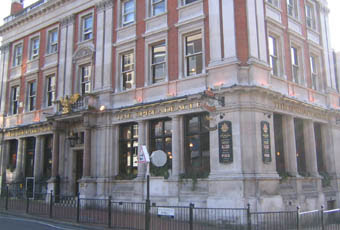 Croydon Green Party member Andrew Lindsay will again peddle his way up the country to highlight the plight of the rhinos. This time he is welcoming volunteers to join him!

LOOKING FOR AN ADVENTURE?

UP FOR A CHALLENGE?

JOIN ME ON RHINOCYCLE007 FROM LONDON TO EDINBURGH, ANY TIME BETWEEN JUNE 16TH AND JULY 8TH TO RAISE AS MUCH PUBLICITY AS POSSIBLE AND HELP SAVE THE JAVAN RHINO (AND OTHER CRITICALLY ENDANGERED SPECIES) FROM EXTINCTION. 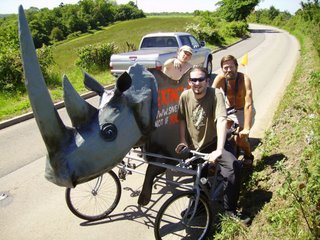 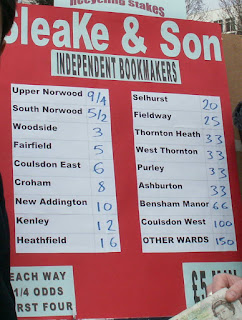 Comment made in response to the report that 6 more wards are to have a second recycling box
"Looking again at our 'odds board', 3 out the first 5 wards in the 'market' were selected for the second recycling box. In essence, the Tories protected their councillors and no safe Labour seats were chosen. I have contacted the environment department to explain the decison making process when selecting these wards. By the way, I have bag of used batteries which is getting heavier every year. I am waiting with bated breath for the moment I will be able the put them in my green recycling box." 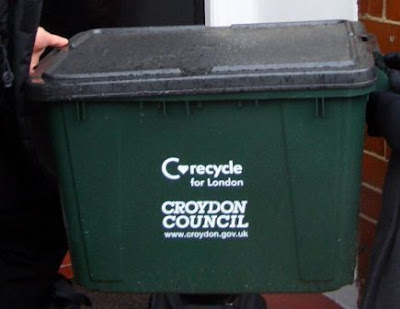 The governments own Stern report shows that the real costs to the economy are up to 20 times greater if real action is not taken imminently to tackle global warming.
Readers that have watched ‘An Inconvenient Truth’, the feature film documentary on climate change, will be aware that the movie highlights recycling as a way individuals can make a positive difference. It is without doubt that kerbside recycling improves overall recycling rates. Even taking into account the councils latest improvements (Croydon Guardian April 18th - New service aims to make it easier to tackle food waste), why is it that over half the wards in Croydon are still waiting for a second recycling box for their plastics, card and garden waste?

Greens in the news 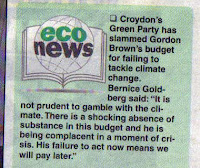 The next meeting of the Sutton and Croydon Green Party will be on Tuesday 10th April at 8pm at the Centre for Environmental Initiatives (aka ecolocal) Carshalton, map here. 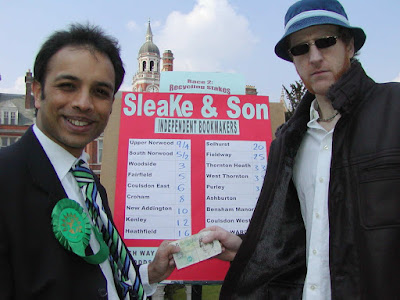 
Local Greens welcome news that 4 more wards will receive improved kerbside recycling collections BUT ask, “what about the other 16 wards?”

Local Green Party spokesman Shasha Khan said, “I welcome news that plastics, cardboard and garden waste recycling will be extended to four more wards. However, is it right that these wards are likely to be selected with political gain in mind and not the needs of the community? Moreover, what about the other 16 wards?”

From my experience of talking to residents, people demand better recycling facilities. They want to build a sustainable future for their children and to cut waste.

In Croydon, Labour and Conservative councils alike are using recycling as political tool to clinch votes and not as a solution to our sustainability problems.”


In April 2006, one month before the council elections, the then Labour council extended kerbside recycling in four wards (Addiscombe, Shirley, Waddon and Norbury) in Croydon. It was supposed to be trial. It was cynically marketed as a borough wide expansion. Additional collections for cardboard, plastics and garden waste were introduced in these wards.

Arguably, Addiscombe, Waddon and Norbury were selected because they were Conservative targets. The margin between the Consevative and Labour vote was minimal in these wards. So, the ruling party improved the services in that ward to clinch those all-important votes.

Nearly one year after the Conservative party have taken power, rather than roll out a borough wide extension, they have merely made permanent the ‘trial’. This is not surprising because they won Waddon and Addiscombe with slim majorities.

Shasha Khan continued, “After the 2006 local elections, Upper Norwood and South Norwood have become the new marginal seats. So, don’t be surprised if these two wards are selected for extended kerbside recycling. Is it right that we all pay the same council tax, only for some wards to receive more services purely on the grounds of political gain? The council has a statutory recycling target of 30% for 2007/8 (1). Unless a principled stance towards recycling is adopted, they are going to miss that target.”

Croydon Green Party will be using street theatre - using a bookmaker’s odds board - to demonstrate how easy it is to predict the wards that will be chosen because they are nearly always marginal seats.

A Day in Brighton

After being up to an hour late I didn't really know what to expect when I entered Brighton. A group of activists from South London had met Cllr Simon Williams at the station already, I managed to make my way to the Brighton Green Party headquarters and as soon as I entered the office I was immediately hit by the scale of the operation, the professionalism of the party and just how organised the campaign was.
A couple of friendly activists helped me sort myself out and took me to where I was supposed to be, firstly helping to hand out the local Green Party newspaper, "GreenLeaf". I was lucky enough to meet the hard working MEP Caroline Lucas who was down to give her support to the Brighton campaign.

After handing out a few newspapers I met up with local activist Dave Walsh and a fellow traveler, Andrea Hughes, down from Lewisham for the day to deliver GreenLeafs. I spoke to a couple of residents who seemed very happy to be getting Green Party literature and wished the party well.
The Brighton Greens are a beacon of what a successful Green Party grouping is capable of, the candidates at last General Election in all 3 Brighton seats saved there deposits, with Cllr Keith Taylor taking 22% of the vote. Currently they have 6 local councilors and significant gains are expected by the party and independent onlookers (yet Labour leaflets still insist the Greens can't win!). With only 6 councilors they have still been able to put a lot of pressure on the Labour council, such pressure has led to the greening of developments, fairer secondary school admissions process, ensuring children from poorer families get the chance to go to the best schools in the local area and much work has been done to help protect small and independent traders in the town.
The Brighton Greens show that a Green vote is not a wasted vote, this is why I urge all voters disillusioned with Blair's Britain in Croydon to vote for real progressive and positive change in your local community. Help us elect YOUR first Green Councilor in Croydon... Lewisham and neighbouring Lambeth have both done it and so can you. Next time anyone from Labour tells you a Green vote is a waste, point out to them the success of the Greens in Brighton!
I also urge all local Green Party members to make the journey down to Brighton for an afternoon and help out with some leafleting or canvassing.... I assure you it will not be a wasted afternoon!