Peter joined the Green party around 1986 while working as a postman at Sutton sorting office, and with his late wife Jose was an active and committed stalwart of the local Sutton party until shortly before his death.

Peter was a passionate advocate for justice and a thorn in the side of his local MP with his frequent handwritten letters. He worked tirelessly to promote and support both local causes and international campaigns and was never afraid of controversy. He attended numerous demonstrations in London for the Palestinian cause. He was an active memberof the local Amnesty International group, for whom he wrote many (again handwritten!) letters. In more recent years he focussed particularly on NHS privatisation and the KOSH campaign to keep the local St Helier Hospital. The front of his house was usually adorned with banners and displays of his current issues, so he really got his messages across to his neighbours!

Peter was also a very talented man with a variety of creative interests, turning his hand to vernacular architecture, pottery, painting and drawing - including a range of hard hitting posters and displays for our campaigns - and, maybe less successfully, the violin!  Just before he died, the local adult education college in Sutton put on an exhibition of a range of his work, as they felt it merited wider attention.

Peter’s house was like entering a library-cum-museum, a bit reminiscent of a William Morris house, whom he greatly admired: There were shelves and shelves of books on a huge variety of subjects, many of them really heavy political tomes - which scared off any lightweights around! (And let it be remembered that Peter couldn’t read until about the age of 10 when he was evacuated during the war.) Then there were his paintings and artifices all round the walls, his “barge painted” wooden kitchen cupboards, his doors with painted figures – the list goes on!

When Peter and Jose’s promising son, Shane, was tragically killed as a young man in a road accident near where he lived in St Andrews, Peter responded by raising money to plant trees in Scotland and made many lifelong friends and contacts with Shane’s friends there.

Peter’s death comes less than a year after he lost his wife Jose who had been poorly for some time. He was just beginning to pick up his life again, cycling regularly (he never drove a car) and doing his gym exercises in the local parks when the news of his cancer came through quite recently. We extend our very best wishes and warm support to his surviving daughter Angie as she comes to terms with her great loss. In saying goodbye to Peter, the local Green Party is saying goodbye to a man of great stature, whom some of us have been very privileged to know.


Thanks to Gay McDonagh and Bob Steel for the words above. I was privileged to know him and remember being amazed by his library-cum-museum of a house. In the summer of 2009 I went to his house to pick up a new placard/poster display unit for our stall at the Thornton Heath Festival. Smartphones weren't so smart in 2009, but I did record some footage while there. See below:

He stood in local, London and general elections and was always campaigning, Here I've identified him at one of the Stop The Incinerator demos. 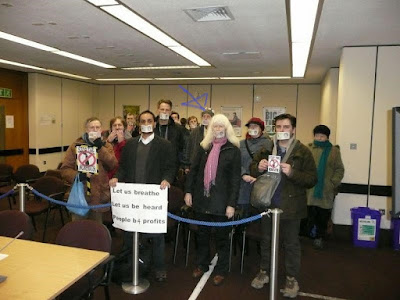