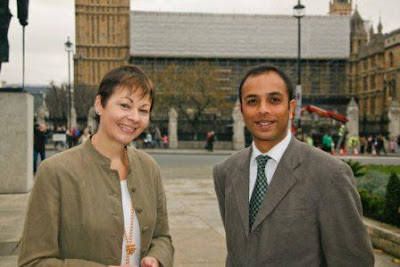 The election of the first Green Party MP, Caroline Lucas, is inevitably going to lead to a whole series of parliamentary 'firsts' for the Green Party. One of the more historical moments took place last week when Caroline asked the first question by a Green Party MP at Prime Minister's Questions. Probably to the surprise of sizeable swathe of the electorate - who still regard us as a single issue party - THE QUESTION HAD NOTHING TO DO WITH THE ENVIRONMENT!

Caroline Lucas (Brighton, Pavilion) (Green): Homecoming parades for our very brave soldiers in Afghanistan are incredibly important, but so is an exit strategy from Afghanistan. Given the growing agreement that there is no military solution to the crisis there and that the head of the Army himself has said that we should start talking to the Taliban soon, would the Prime Minister not agree that we should start talking now, so that we can save more lives on all sides and bring our troops home?

The Prime Minister: May I first of all welcome the hon. Lady to the House? Winning her seat was an incredible achievement for her party, and I know that she will make a huge contribution during this Parliament.

We discussed Afghanistan at quite some length in the House yesterday. Of course there is no purely military solution; very few insurgencies are ended by purely military means. But I think it is important to continue with the strategy this year of the military surge, to put pressure on the Taliban-and, of course, there should be a political track. But as I said yesterday in the House, we have to recognise that there is a difference between the Taliban linked to al-Qaeda, who want to do so much harm not just in Afghanistan but across our continent as well, and those people who have been caught up in an insurgency for other reasons. Should there be reconciliation and reintegration? Yes, of course; there is, and we can go further. But I think that the things that the hon. Lady is talking about would not be advisable.