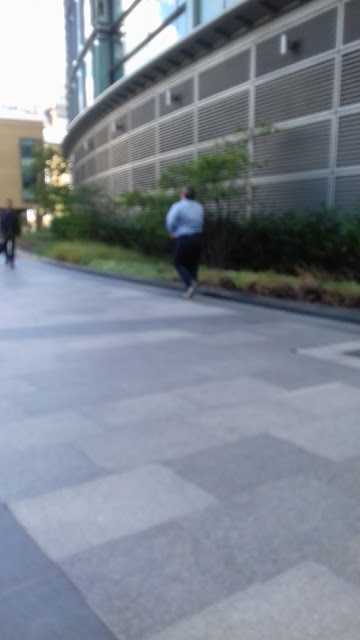 While sitting on a bench at Victoria Place, last Wednesday, I noticed a familiar face walk past. I couldn't be certain but it looked a lot like the Deputy Leader of the Labour Party.

I thought to myself, oh well we'll never know.

However, moments after I took this photo (above) as some sort of snap memento, the figure stopped and held out his mobile phone and stared at its screen. I assumed he was checking social media. He paused for such a long time that I thought here's my chance to satisfy my curiosity. So, I walked up to him and said, "Mr Watson?"

"Hi," he replied, "I was just playing Pokemon Go. My kids have really got me into it."

I had a look at the screen on his phone and for the first time I saw what the  Pokemon Go game looked like.

We had a chat about politics and leadership elections. I confessed I was in the Green party and we talked about Caroline Lucas MP, and I explained that she was standing with Jonathan Bartley. Mr Watson said he had just come from Labour party HQ, and joked about whether a Corbyn/Smith job share could work in his party!

Given that Brexit is now done, the chattering classes are all talking about the state of the Labour party; the populace are talking about Pokemon Go and occasionally the two worlds collide.

Mr Watson has got form for being down with the kids. Some of the media slated him for going to Glastonbury but he seems like likable bloke who evidently has interests outside of politics!