Following the press release (post below and here) which ended up being the most read article on Inside Croydon last week, both Inside Croydon and I received an email from Paul Oakley, UKIP London Regional Organiser Team.

The emails says a lot including:

"UKIP have not the slightest idea whether or not Mr Morgan is responsible for the actions about which you complain. Please note however that his membership of UKIP was rescinded some weeks ago. As such, it is false to suggest as you and Mr Khan do that this is a UKIP campaign."

Also, it appears that the UKIP web site is not approved.

So it appears Peter Morgan is too extreme for UKIP. Quite an achievement. Moreover, the UKIP Croydon North web site is not approved. Does anyone in UKIP know what is going on in Croydon North? What a joke.

After an exchange of emails, Inside Croydon has posted this article on Morgan: http://insidecroydon.com/2015/06/22/coulsdon-roads-campaigner-morgan-is-kicked-out-of-ukip/

20mph consultation turns into a referendum

The first I got wind that UKIP's Peter Morgan*** [see arrow in above picture] was against 20mph in an almost fanatical way was at the first Croydon North hustings, which was strange in itself because he lives in Coulsdon (Croydon South).
He asked each of the candidates on their views on 20mph speed limits. He is an interesting bloke, and whilst I don't agree with his politics, he has told me on two occasions he admires the stand I have taken with regards to the incinerator. Maybe he did that so that I didn't get riled by his activities. Inside Croydon has many articles on him. 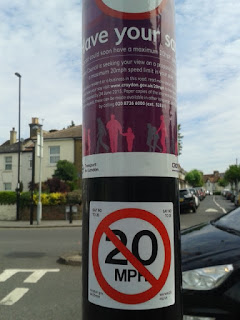 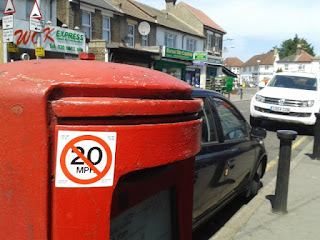 As we approach the end of Croydon Council's 20mph speed limit consultation for Croydon North zone , we can see just how fanatical Peter Morgan is about stopping the transition to a 20mph speed limit. He has been active on twitter under many guises including Calvin Mantell https://twitter.com/croydoncyclists/status/609271776573530112 as well as the main Noto20mph account https://twitter.com/SayNOto20
His activity has not been limited to social media, all across the consultation zone, his stickers and posters can now be found. I have today asked a public question to the Council asking if any action will be taken given there is clear evidence there is a connection between North Croydon UKIP and SayNoto20mph
For more info see press release at the bottom of this post.
Somewhat taken aback by Morgan's active misinformation, including leafleting the whole of consultation zone with at least two leaflets, local Greens are working with Croydon Cyclists to try an achieve a YES vote. Peter Underwood has written an excellent letter which was published in the Croydon Guardian.
I understand Labour's Councillor Kathy Bee has also been active. However, whilst there maybe individual councillors in favour of 20mph speed limits I don't detect massive levels of enthusiasm from Croydon Labour.

Press release immediate (18.06.15):
Starts:
Croydon Green Party today criticised a campaign to try and stop Croydon Council introducing 20mph speed limits on residential roads in the borough.
The http://saynoto20.org.uk/ web site is identical to the No to 20mph page on the http://www.ukipcroydonnorth.co.uk/ web site. The twitter account also appears to be run by a UKIP member.
Croydon Green Party spokesperson Shasha Khan (1) said, “Just like on Climate Change, UKIP are once again going against public opinion and common sense by disputing the overwhelming and logical evidence. They say that reducing speed limits to 20mph will have little if any impact to road safety but research shows that, on average, for every 1 mph speed reduction there is a 6.2% accident reduction (2).”
“We are pleased the Labour council are following other councils in London, such as Islington and Southwark, in moving to 20mph limits. 20mph speed limits on residential roads has long been a national policy for the Green Party.”
Shasha continued “Unfortunately, the feedback I am getting from many mums and dads is that they thought the notices pinned on lamp posts were more of a notification rather than a consultation. They don’t realise that they have to tell the council that they support 20mph limits so that they are brought in.”

“The no campaign have also been illegally flyposting their spurious messages on lamp posts in the area. We must not allow UKIP to hijack this consultation It is vitally important people go online and complete the survey at http://www.croydon.gov.uk/20mph or obtain a paper copy from the council.”
The consultation ends on 24th June. Croydon Council state that evidence has demonstrated clear benefits from lowering speed limits in residential areas, including
Ends


There was also some additional coverage that I helped instigate just before the election. Private Eye carried a piece on the latest revelations in the infamous Rotton Boroughs page. Councillor Nick Mattey has been excellent in exposing this stuff. As someone who quietly cajoled Nick to come out in the way he has, I am so pleased with the results!

Jim Duffy from Sutton Greens has written an excellent letter to the CEO at Sutton Council which explains where we are at now.

I read with some dismay, but not with surprise, that Viridor has donated £275,000 to the Holy Trinity C of E Church Hall in Wallington which is used routinely as a meeting venue by Sutton Liberal-Democrats.  The figure is so high that it draws attention to the fact that the local Lib-Dems have also been pushing through the planning application for the company's incinerator and it makes one wonder if this, in some way, is a reward for the council's co-operation in this matter.
I would be grateful if Sutton Council could set up an independent inquiry into the whole process with a wide scope allowing investigation into any connected areas.
In asking for this inquiry I would submit the following points:
1. No other local churches or charities have received anything in the order of £275,000 from Viridor Credits, the committees allocating monies from Viridor's land-fill tax revenue. All Saints church, the nearest to the planned incinerator received just £15,000 despite being considerably less well off than Holy Trinity church hall. Apart from the church-hall, only national-level monuments such as Canterbury Cathedral and Glastonbury Abbey have received six-figure sums. Although there have been claims that the money is for the church building restoration, it does in fact appear destined to go to the adjoining well-appointed church-hall, for a car-park, landscaping and drainage. One must question the justification for such a huge donation to an already affluent church hall and how it is possible to spend so much on a car-park.
2. I understand the £275,000 was allocated to the church hall shortly after the three Lib-Dem councillors of the Wandle Valley ward had run a campaign promoting the Viridor incinerator. Two of the councillors are apparently regulars at the Church. The third one also sat as liaison person on 'Viridor Credits' at Sutton Council, helping advise how Viridor money should be best spent. Elaine Drage, the wife of John Drage, one of the Wandle Valley councillors is also an elder of the church and, like her husband, a major sponsor of Tom Brake who has from the beginning promoted the incinerator. It is now public knowledge that John Drage (and Elaine Drage) has had a long term personal friendship with Colin Drummond the recently retired chairman of Viridor but it is not clear at what stage in the promotion of the incinerator this declaration was made. Apparently he did not declare this conflict of interest to the SLWP, on which he served, until after substantial contracts had been awarded to Viridor.
3. It is believed that Viridor may hold some sway over the Viridor Credits Scheme.  Or perhaps pressure was applied here from some other quarter. It is perhaps here that special emphasis  of the inquiry needs to be focussed.

Points on the broader planning process:
4. National Lib-Dem policy is against waste incineration. Many Lib-Dem councils have fought against such planning applications on the grounds of health-risk to the public and that incineration would undermine recycling. It was in this respect somewhat 'contrary' for Sutton Lib-Dems to support the incinerator.
5. At Sutton's second planning meeting to decide on the incinerator the Chief  Planning Officer wrongly stated that "there's a strong economic case" for a heat supply system from the incinerator to the Felnex estate. This statement seemed to sway the argument in a meeting delayed due to a split vote at the initial meeting. However a London conference of waste experts called "Where there's muck there's money" had previously unanimously agreed that such heat transfer systems are not economically viable. Also it was already known that the South East London Combined Heat and Power (SELCHP) incinerator was not supplying heat to local residences for economic reasons, despite the incinerator being in existence for some twenty years. Recently a Sutton Council document has come to light, through the Sutton Guardian, showing the heat would be more expensive than from conventional boilers, not less expensive as had earlier been claimed, thereby throwing further doubt on its viability.
6. Councillor Stephen Fenwick has said publicly that he was coerced into changing his vote to favour the incinerator.

7. Councillors Margaret Court and Monica Colman also changed their votes. It is not known what pressure if any was applied to them and all the councillors and officers involved in the planning process.
8. Viridor has been tardy in implementing timetabled planning agreements in Beddington Farmlands, due for transformation to a regional wildlife park, resulting in the loss of some rare species. Sutton council for its part seems to have let Viridor 'off the hook' in applying these crucial habitat agreements. As the unimproved land consequently had less ecological value this arguably balanced the planning application in favour of the controversial incinerator. Eleven local bird species were defined as rare and important in Viridor's planning applications. Two have now disappeared from the site, four are dangerously low in number and two were predicted to colonise but didn't. Viridor felled trees used by rare Tree Sparrows two years ago but this was met with impunity by Sutton Council.
Lost birds: Redshank, Yellow Wagtail
Dangerously low in numbers: Tree Sparrow (Beddington is only one of two habitats in the South UK), Little Ringed Plover, Sedge Warbler, Reed Bunting
Predicted to colonise but didn't: Common Tern, Ringed Plover
Summary:
There appear to be numerous inconsistencies and opportunities for a conflict of interest which need to be questioned and I believe it would be best if Sutton Council could undertake a thorough means to clear up what might to outsiders seem like corruption. There is firstly the narrow question of how the Viridor Credits scheme could possibly justify such a large donation to an affluent resource which is so intimately linked with the ruling political party. Then there's a wider question of whether suspicious-seeming planning decisions could be linked to this (and any other unknown) donation, or pressures or coercions.
The inquiry should be open and transparent and, in my view, should be undertaken by a local authority not involved with the South London Waste Plan, or otherwise by some other entirely independent agency with respected experience in this type of investigation. I would like to see representation from the Stop the Incinerator campaign in setting the parameters and agreeing the executors of the inquiry. I'm happy to help with any aspect of the investigation.
Please acknowledge receipt of this request by return and copy all replies to Paul Pickering from the Stop the Incinerator Campaign (above) as I may be off-line during the half-term break.

Tags croydon, greenparty
Posted by Shasha Khan at 10:54 am No comments: Links to this post