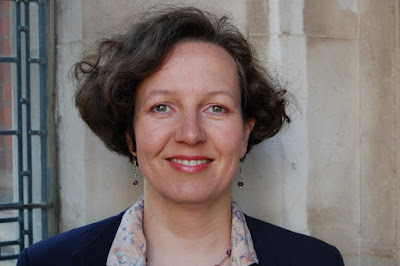 Following a shocking Channel 4 documentary on the diabetes Clinic at Mayday hospital (1), the Croydon Green Party is encouraging local schools to adopt ‘Meat Free Mondays’ to help slow down the spike in the number of cases of type 2 diabetes in young people.

The TV programme, shown on Monday 16th August, revealed that one in five patients being treated at the hospital has diabetes.

Meat products and dairy foods make up the greatest percentage of saturated fat in our diet, contributing significantly to the huge increases in obesity and adult onset diabetes, as well as heart disease and certain cancers.

“The NHS spends £1million every hour treating diabetes, using 10% of its annual budget. A new diabetic is being diagnosed every three minutes in the UK. These are startling statistics.

Tracey, who is The Vegan Society’s Croydon contact (3), went on to say:

“Most people do not eat enough fruit and veg. I support training courses on how to eat healthily for local children, aged three and upwards.

“Meat consumption is clearly too high, and children need to be introduced to meat free diets.

‘Meat Free Mondays’ is an initiative that the council should be promoting as part of healthy school meals programme.

“It appears that Croydon is on the verge of a diabetes epidemic. Instead of spending millions on drugs and other treatments, we should encourage everyone to eat a plant based diet. Prevention is always better than cure, healthwise, financially and for the sake of the planet’s precious resources.”

(2) Tracey Hague stood as a Green Party candidate in Addsicombe ward in the 2010 local elections.

Letter on the areas that will face cuts 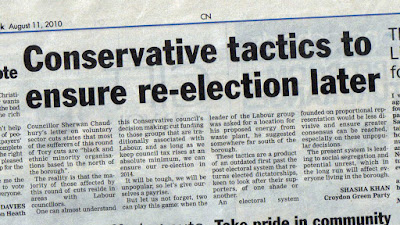 Councillor Sherwan Chaudhury’s letter on voluntary sector cuts states that most of the sufferers of this round of Tory cuts are “black and ethnic minority organizations based in the north of the borough ”. The reality is that the majority of those affected by this round of cuts reside in areas with Labour councillors. One can almost understand this Conservative council’s decision making: cut funding to those groups that are traditionally associated with Labour, and as long as we keep council tax rises at an absolute minimum, we can ensure our re-election in 2014. It will be tough, we will be unpopular, so let's give ourselves a payrise!

But let us not forget, two can play this game: When the leader of the Labour group was asked for a location for his proposed energy from waste plant, he suggested somewhere far south of the borough.

These tactics are a product of an outdated first past the post electoral system that returns elected dictatorships, keen to look after their supporters, of one shade or another.

An electoral system founded on proportional representation would be less divisive and ensure greater consensus can be reached, especially on these unpopular decisions. The present system is leading to social segregation and potential unrest, which in the long run will affect everyone living in the borough.

Montage of the event.

Although the library has been open for a couple of months now, the official opening (last week) gave local people an opportunity to meet and thank all those who delivered the refurbishment. We are already seeing the benefits of the eye-catching design through increased memberships. I'd like to thank the fellow members of Thornton Library Development Committee for playing their part.

Council's explanation to why stolen swings won't be replaced 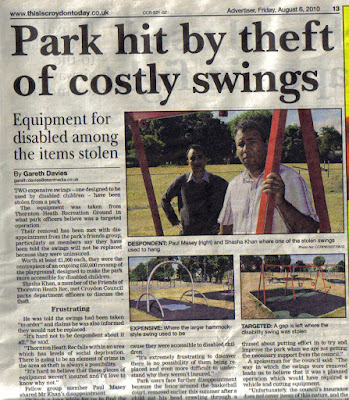 The Chair of the Friends of Thornton of Thornton Heath Recreation Ground and I were asked to comment on the theft. Link to on online version.

I received a communication from the council after this piece came out in the Croydon Advertiser:

Unfortunately insurance companies stopped including play equipment on local authority insurance policies quite a few years ago as they were having to pay out too regularly because of increasing incidences of vandalism.

As far as I am concerned, the people who use the park responsibly are being punished here. The council must be saving a considerable chunk of money across the borough which would normally be allocated for insurance premiums. This money could be spent on the playground. I hope the constant, "there's no money" pronouncements do not condition people into believing the cupboard is bare. There is money. It is estimated £100 billion alone can be recouped if the government had the political will to fix "flaws and holes in the tax system."
--------------------------------------------------
Tags croydon, greenparty
Posted by Shasha Khan at 9:26 pm No comments: Links to this post 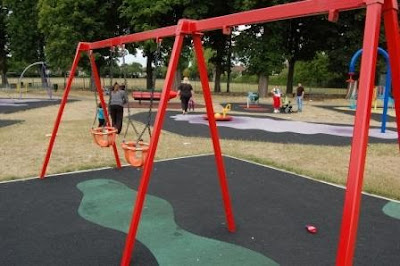 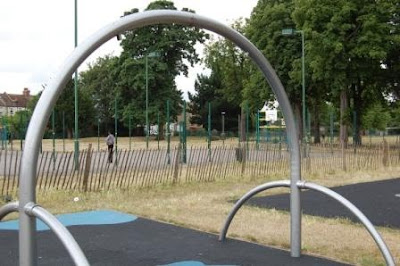 In the background two ball courts without fencing.

Apparently we are all in this together, but I would hazard a guess that the young people, or their parents, that use the facilities at Thornton Heath Recreation Ground had nothing to do with the financial crisis that is prompting wholesale cuts in government departments local and national. Yet as Tony Benn says, "Ordinary people are being forced to pay for bankers' profligacy."

Tags croydon, greenparty
Posted by Shasha Khan at 9:04 pm No comments: Links to this post 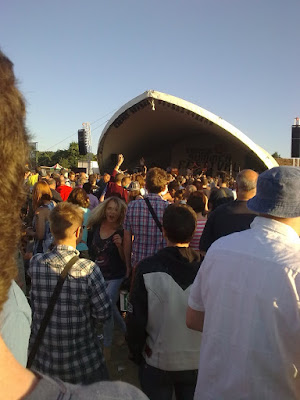 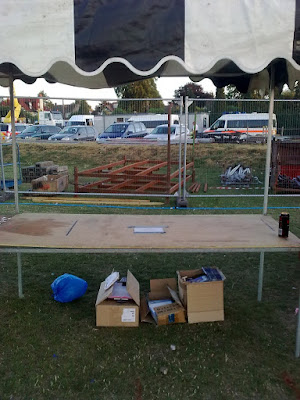 Pics above were taken at the World Party (Saturday 31st July). The Lightning Seeds put on a really good show to close the day out. Earlier in the day I went to the Conservative Party stall to have a discussion about the proposed cuts to local voluntary sector organisations. However, their stall was bare - they must have packed up fairly early in the afternoon. 'Oh Lucky You'. 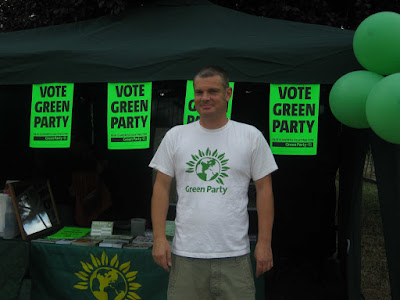 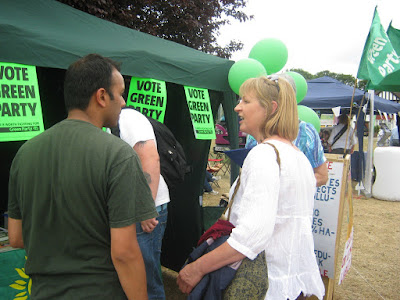 Pics above taken from the Mela (Sunday 1st August). Gordon put together a fantastic looking stall which attracted a lot of interest. All in all it was another successful Mela. Tabla player Shabazz Hussain's performance on the The Classical Stage, sponsored by the Asian Resource Centre Croydon (ARCC), was mesmerising . Incidentally, ARCC are one of the voluntary organisations that have had their grant from the council slashed. 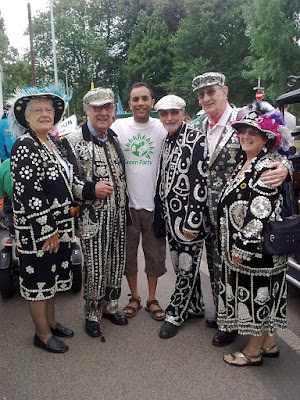 I had quick chat with the Pearly Kings and Queens before the procession set off from Woodside Green. I asked them how they became bestowed with title. Contrary to popular belief, it is not a prerequisite to be born within the sound of the Bow Bells. The actual titles are passed down from the original 28 families (i.e, those pictured are descendants of the original Pearly families). 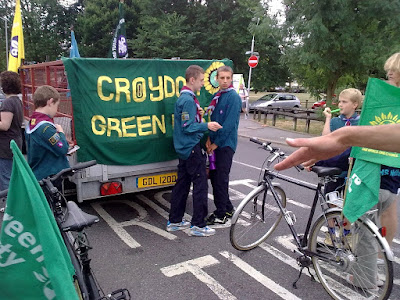 The Croydon Green Party cycle convoy followed the scouts from Woodside Green to Ashburton Park - the long way round. Sadly, their truck - the one in the picture adorning the banner - conked out at the junction of Morland Road and Blackhorse Lane. A combination of Green Party members and Croydon Police managed to push the truck off the main road! 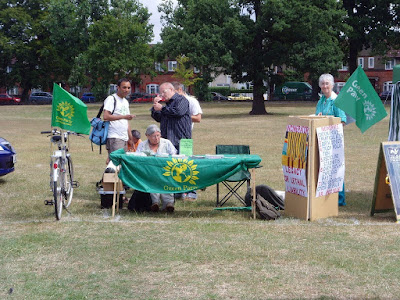