WIll this all end in Civil War? It can't do. 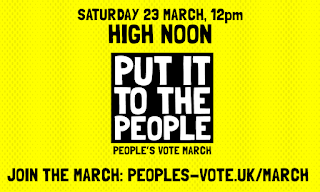 Today my family and I are going to the the Peoples Vote March in Central London. I am not paid up member of the 2nd referendum brigade because I am more concerned about how we heal the divisions that have become so starkly noticeable as a result of Brexit.

We went to the previous rally and I felt the mood was more disillusionment with Brexit, because if there was a referendum and a Remain type option won - it will only anger those that voted LEAVE in June 2016.

I met, by chance, a consultant who works for financial institutions. Presently these institutions are  looking for guidance on what is likely to happen with regard to Brexit. This senior individual noted many similarities with Trump in USA and Brexit in UK. I jested with the consultant that in years to come, maybe we will look back at this time whilst in the midst of a civil war, wondering why we didn't do more to bridge the two sides of the Brexit debate. To my surprise the consultant didn't dismiss civil war out of hand.

Surely we can't end up in a civil war. Civil unrest, maybe. Brexit headbangers are openly ringing up radio stations such as LBC and talking up civil unrest if Brexit doesn't happen in the particular way they want it to happen; On the Today Programme on yesterday, Nigel Farage used the word 'fight' with regard to  defending Brexit when being interviewed by Mishal Husain; and countless MPs are being called traitor by Brexit headbangers outside the Houses of Parliament. Are these the the early signs of something more frightening. I keep hearing the army are on standby.

I was talking to an Egyptian friend of mine, he made the observation that civil unrest starts when a rally or march gets attacked by the opposite side. Could this happen today??

Interestingly, a Professor of Political Economy has noted similarities between the Brexit divide and the English Civil War. They are mainly geographical, but the semblance is apparent in other elements.

The above is all hypothetical, but sometimes I wonder how is this going to end?